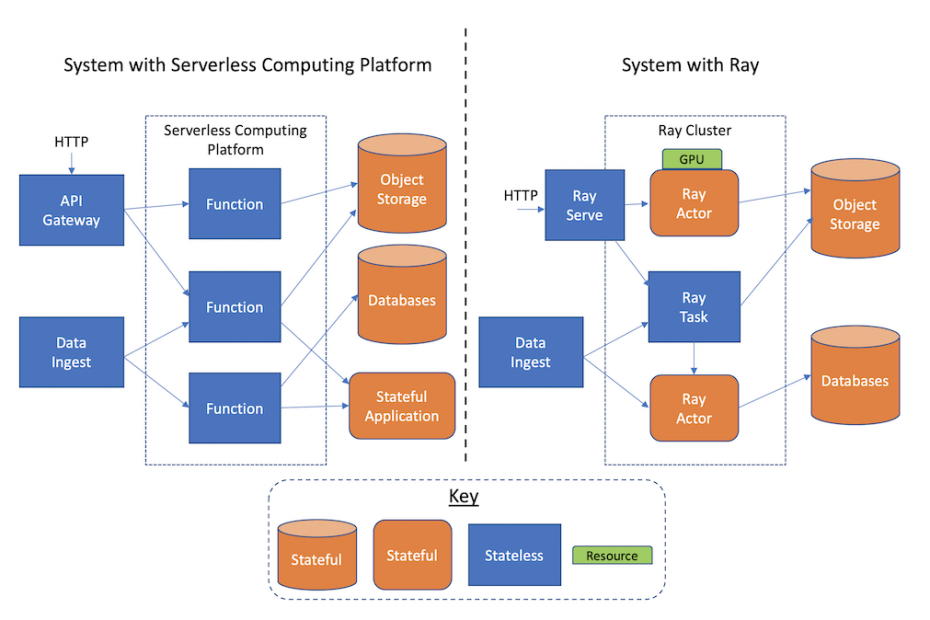 Note: this is part of an ongoing series of posts about Ray. The full series is:

Most cloud providers have a Serverless Computing offering, also known as Function as a Service. These include AWS Lambda, Google Cloud Functions, and Azure Functions. Serverless computing  has dramatically simplified cloud applications,  allowing developers to deploy stateless code*, called as a function or as an executable, directly to the cloud.  Application developers no longer have to provision, manage, and scale virtual machine instances.

Serverless computing has not caught on in the machine learning space. This is due to several reasons:

Ray and Its Programming Model

Ray is designed to overcome these limitations while preserving the high level of abstraction over machine resources seen in serverless computing. For the application programmer, Ray provides two key abstractions: Tasks, which are stateless functions in the serveless model, and Actors, which are stateful objects. For more details, see my previous blog post on Ray’s architecture.

The picture above compares a typical system architecture for Serverless Computing and Ray. Serverless functions typically reside between the public-facing ingress points and backend stateful stores and/or applications. These functions route and coordinate calls between the stateful backend services. In a Ray-based architecture, Tasks can serve an equivalent role. In addition, Actors can be stateful, allowing more complex interactions in the middle tier or application-controlled caching of state. Ray Serve assumes the role taken by an API Gateway in a Serverless architecture — it provides HTTP front-ends to Ray Tasks and Actors. Finally, Ray Tasks and Actors can be associated with hardware resources, such as GPUs, a capability unavailable in Serverless Computing platforms.

Addressing the Limitations of Serverless Computing

Let us look at how Ray addresses the four issues we identified in supporting machine learning applications via serverless computing:

In coming blog posts, I will look at some example Ray applications in more detail. Stay tuned for more!

*:By stateless, I mean that no information is retained between function calls. Stateless code is much easier to deploy and scale than stateful code. Of course, the underlying platforms may do caching of data behind the scenes.